Today is going ok so far, Ada had a very good play in the morning with her physio/OT team – they are so pleased with her progress she is graduating to a new type of play chair😀 She also bounced wildly on her bed and had a little fall, so she’s a bit sore now🙀 The general consensus is she is the best baby on the ward and her Starship fan club is growing daily. Her blood counts are slowly coming up, but still, very low white blood cells, which is within the expected recovery timeframe still. Her blood cultures have shown one strange bacteria, but not consistently, so we are now getting another team of professionals on the case, the infectious diseases people, which will decide on what antibiotics to continue. This means Ada has not only visited every ward in the hospital, but she has been seen by all the teams except the bone people, and that will probably happen around transplant time! A mega achievement for only 3 weeks in hospital🏆 She doesn’t have a fever anymore so everyone’s pretty sure it’s coming to the end of whatever it is. So although we are total zombies now, Ada is starting to get pretty chirpy again❤🖖🤗

This site uses Akismet to reduce spam. Learn how your comment data is processed.

How you can help 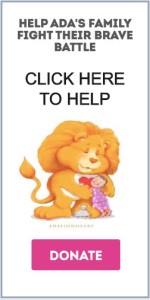